On Friday 4th November 2022, the Acle Cluster of schools came together for the annual cross country event held at Fairhaven CE VA Primary. Thankfully, the weather was excellent and at times the sun shone down upon us! Enthusiasm (and a few nerves) was evident throughout the event and everyone tried their very best, many running with huge smiles on their faces. It was great to see four schools winning trophies! As for Fairhaven, all the children were amazing and as a result were very successful, winning a number of medals and the trophy for the Year 5/6 girl’s race. Finally, thank you to all the parents for their wonderful support during the event.

We had an excellent afternoon of Netball, it was friendly yet competitive and the standard of play was excellent. The winners were Acle with Reedham taking the Silver and Fairhaven the Bronze.

Over the course of a very warm and sunny Wednesday morning, six of the Acle Cluster of Schools attended the annual athletics competition, taking place for the first time since 2019!

Children took part in both track and field events and whether sprinting, hurdling, throwing the javelin or jumping in the sand, they all did their very best, cheered along at all times from the sidelines by family and friends!

Through great teamwork, the event ran smoothly and everyone had a wonderful time!

Over the course of these two warm and sunny days, a huge amount of cricket was played by children from Key Stage 2 in the Acle Cluster.

On Monday, the Year 5/6 children played 4 matches and scored a number of runs, ending up in silver medal position.  On Wednesday, it was the turn of the Year 3/4 children who also played extremely well, and they ended up in bronze medal position.

The children from Fairhaven, some of which hadn’t played a competitive match before, competed extremely well and grew in confidence as the games progressed!  Well done to all involved and thank you for the support given by families on the day!

This was a rather memorable event, six schools from the Acle Cluster took part in our annual football tournament!  Each school brought a Year 3/4 team and a Year 5/6 team.  On a beautifully sunny day at Lingwood Primary, everyone had a great time and enjoyed the competition against children of their own ages from other schools.

The children from Fairhaven, many of which hadn’t played a competitive match before, competed extremely well and grew in confidence as the games progressed!  Well done to all involved and thank you for the support given by families on the day!

What a brilliant day everybody (including the adults) had!  We started our day by gathering in the school hall in our house teams, to find out what we were going to be doing.  The captain of each team had to wear the sorting hat in order to find out which Hogwart’s House they would be part of; the Red Robins were Gryffindor, the Blue Kingfishers were Ravenclaw, the Yellowhammers were Hufflepuff and the Green Woodpeckers were Slytherin!

During the day, each class then went out onto the field to play the game of Quidditch!  They learnt the different roles within the team including the beater, the chaser, the seeker and the keeper (as well as a separate person who was the golden snitch).

They also found out about the equipment used including the hoops, a bludger and a Quaffle!  The game was fast moving, energetic and very exciting and we all walked away incredibly enthused and happy that we’d had the opportunity to feel like a wizard or witch from Hogwarts!

At the end of the day, we gathered together again in the school hall where certificates were presented and the winning trophy was given to Ravenclaw for their excellent performance during the day!

We took 21 children to the Inaugural  Church Schools Cross Country held at North Walsham High School and WOW, what an afternoon we had!   The children from Oak Class and Beech Class took part in their own category of races, the older children running 1800m and the younger children running 1500m.  They competed against children from 8 other church schools and they not only performed amazingly well but also showed superb care and support of each other,
which was absolutely wonderful to see!

Today the children in Sycamore, Chestnut and Beech Class learnt all about Capoeira, a dance created by African slaves who lived in Brazil under Portugese rule.  They would use kicks, cartwheels, ducks and dodging accompanied by musical instruments and singing!  This dance was a way to practise fighting in order to prepare for an escape from slavery.

Joe and Ashley from Capoeira Communities in Norwich visited for the morning and the knowledge they shared really engaged the children, capturing their interest as they had the opportunity to learn so many different moves, actions and words!

These two teams from Fairhaven CE VA Primary attended the Cluster rugby tournament at Redmayne fields to compete against schools from our local area!

They not only played extremely well and showed incredible respect and sportsperson-like behaviours but also both teams won silver medals, scoring a vast number of tries in the process!

Thank you to all the family members for taking the time to come along and support, the children and adults from school really appreciated the extra encouragement!

On Friday 15th October 2021, almost 60 children from Fairhaven took part in the Acle Cluster Cross Country alongside Freethorpe, Acle, Reedham and Fleggburgh.  It was a bright and sunny afternoon which pleased everyone involved!  Over the course of the afternoon there were 6 races (2 from each of the following age groups; KS1, LKS2 and UKS2) and within all of them, the children showed excellent enthusiasm and determination to do their very best!

As for team Fairhaven, they were excellent!  Not only did they successfully win two trophies (KS1 boys and LKS2 girls), they also supported every runner and successfully received a number of medals!

They should be extremely proud of both their achievements and attitude! 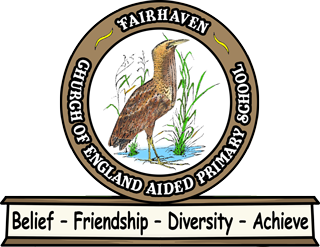